This site uses cookies and other tracking technologies to assist with our promotional and marketing efforts. More information Accept
Look back at the historic events which took place in the years before the Peterloo Massacre.
June 1815 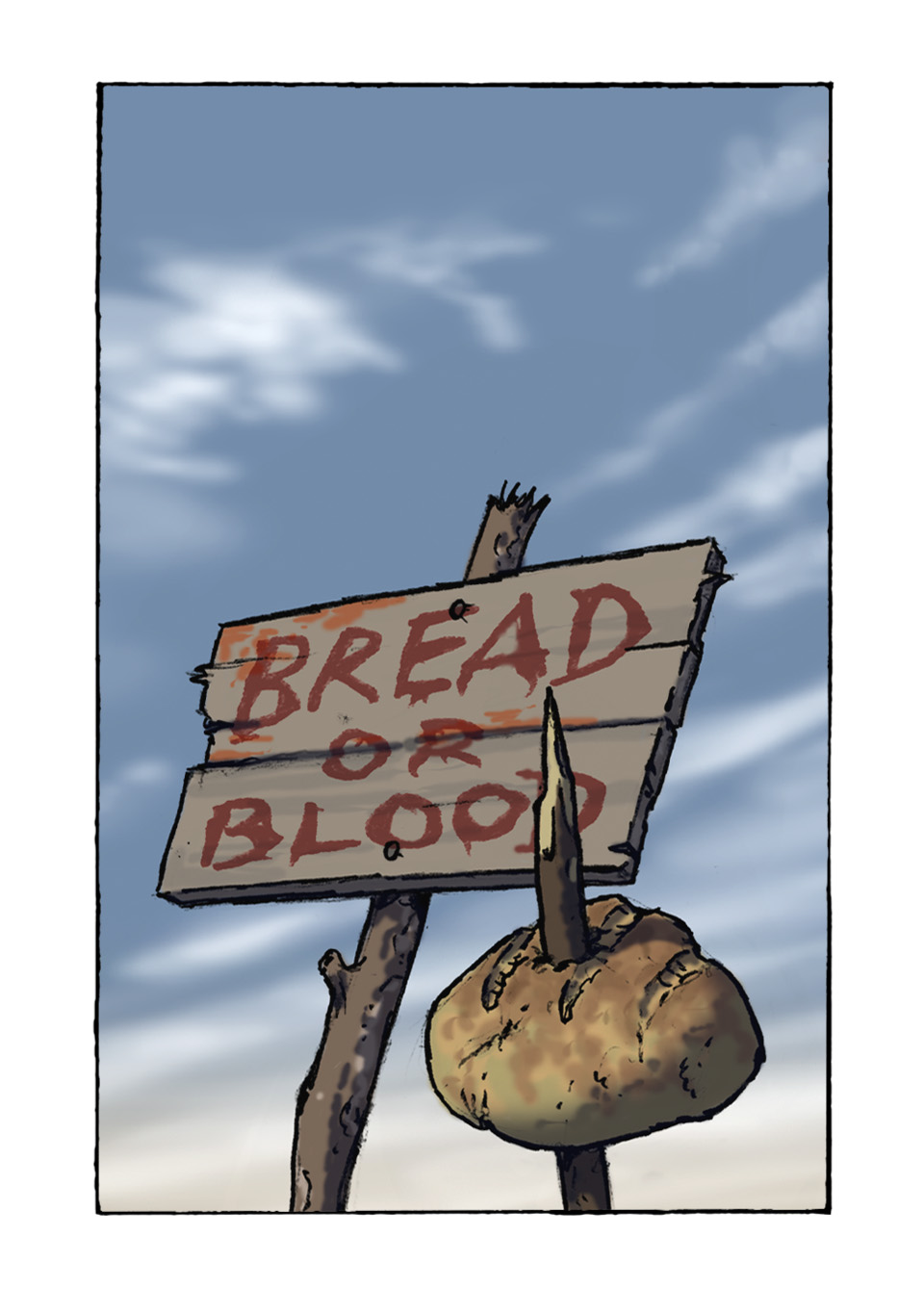 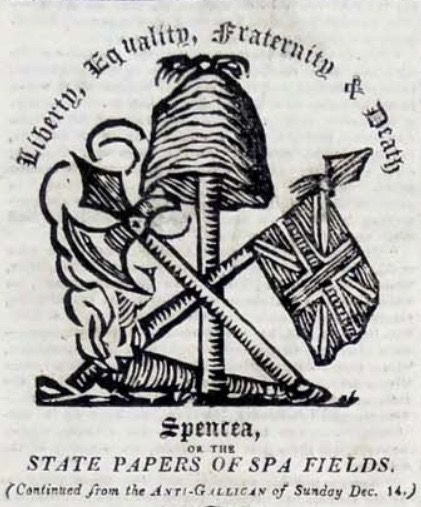 Over 600 petitions for parliamentary reform with nearly 1 million signatures presented to House of Commons and rejected.

Dozens of radical reformers imprisoned without trial in March and April until the end of 1817.

Reformers rally at St Peter’s Field, Manchester to march to London; intercepted by troops on the way. 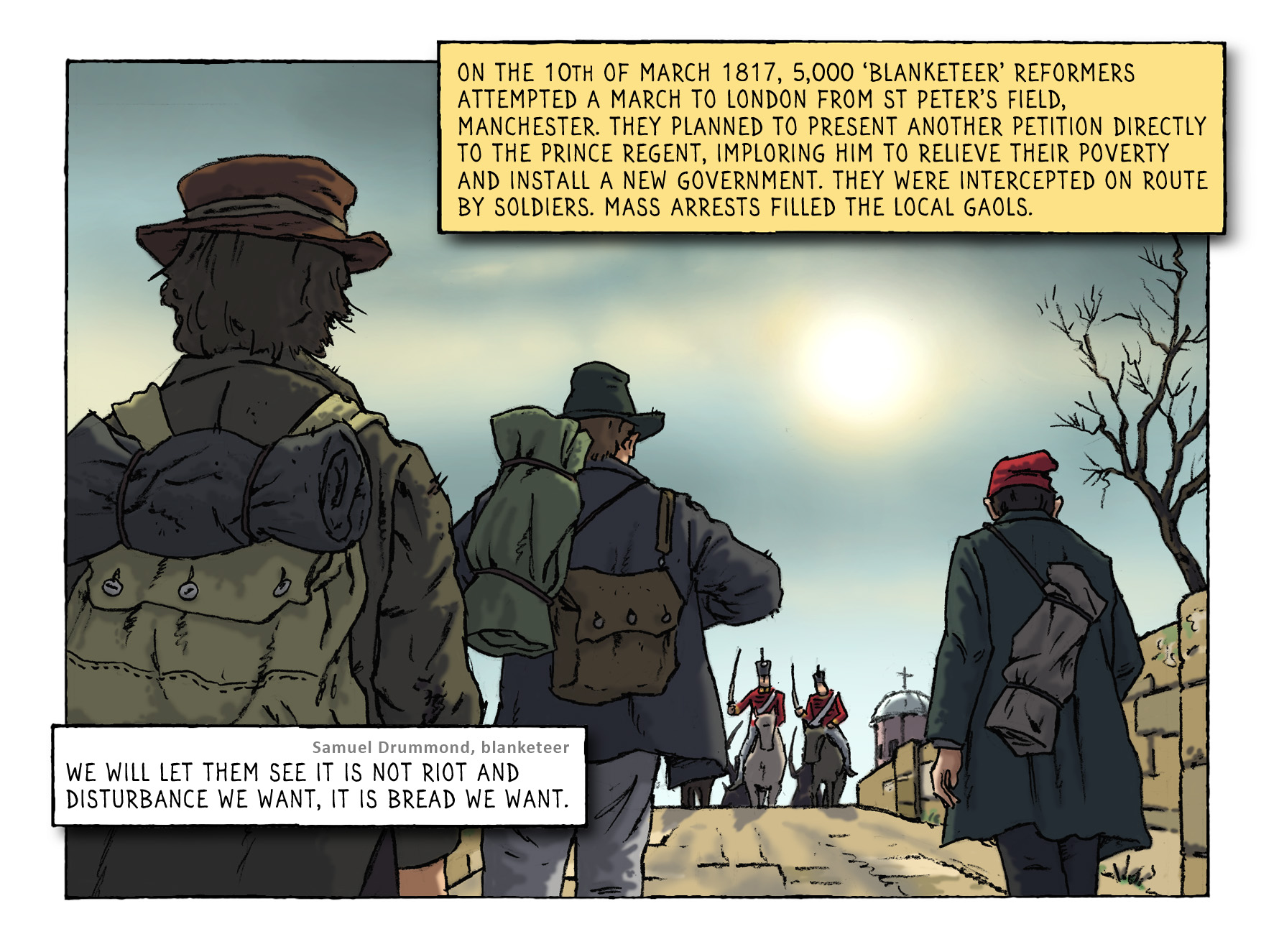 Attempted rising in Manchester, infiltrated (or instigated) by spies.

Attempted armed risings in the north

In Lydgate, Saddleworth, women vote for the first time.

As trade improves, a wave of strikes in the cotton industry and other trades wins wage rises. First attempt to form a general union, the ‘Philanthropic Society’.

Chaired by Henry Hunt, resolves ‘the only source of all legitimate power, is in the People.’ 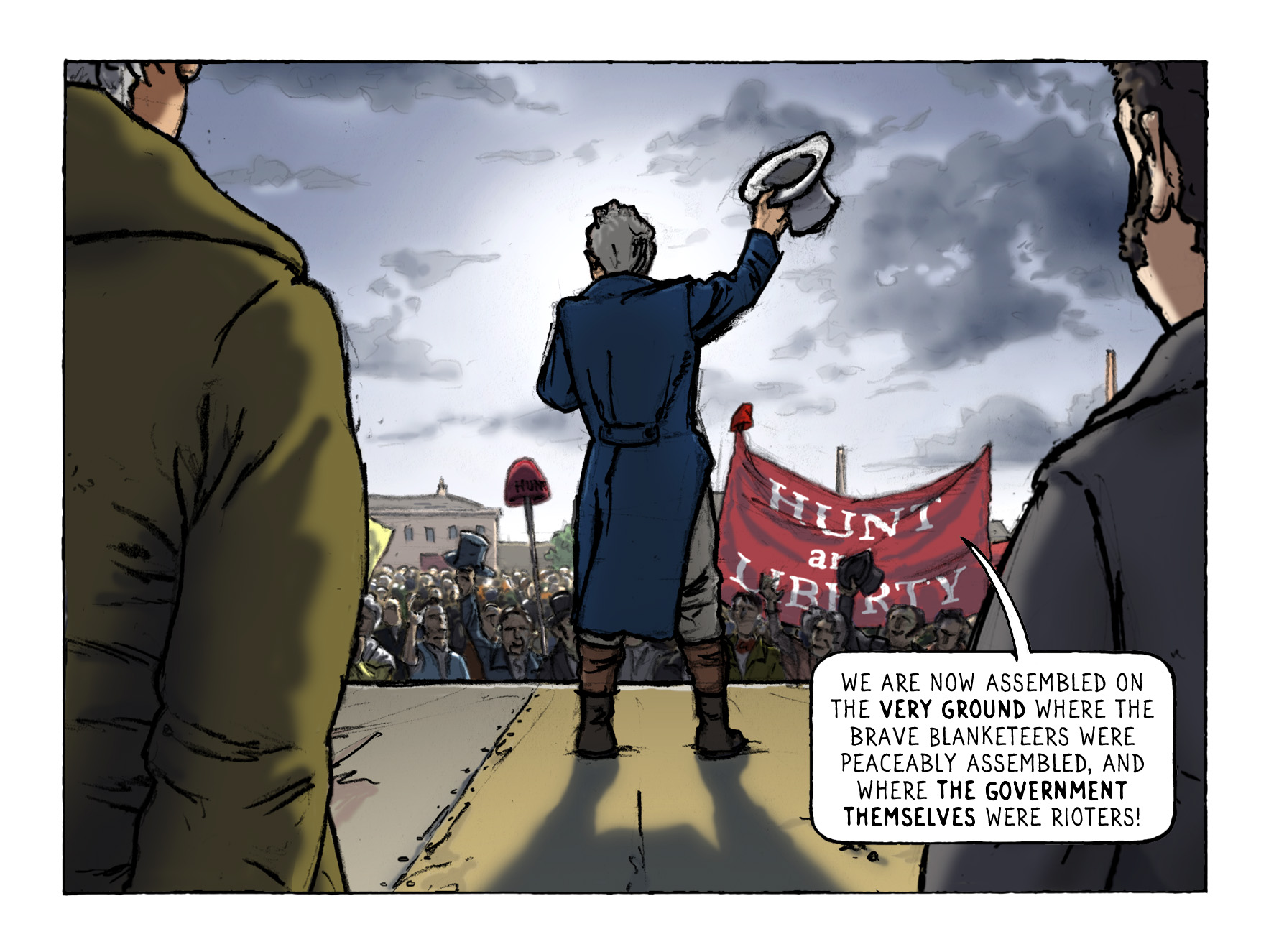 'The fray at Stockport'

Authorities attempt to seize flags and cap of liberty at reform meeting but fought off by demonstrators.

Reform delegates declare for universal suffrage, annual parliaments, vote by ballot, and repeal of corn laws: ‘if we must die, either by starvation, or in the defence of our inalienable rights, we cannot hesitate to prefer the latter.’ 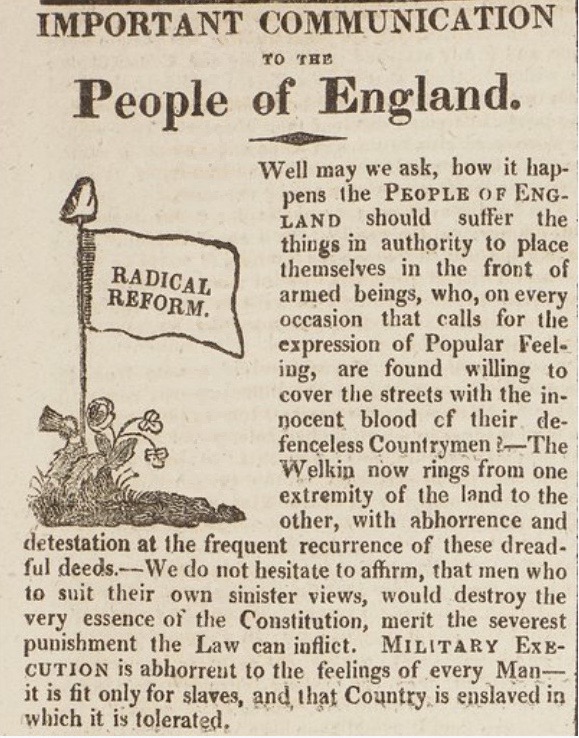 Reform meeting, Ashton, issues ‘An appeal to the People of England’ to hold ‘a general Election of Representatives’ to force a reform of parliament.

Female reformers present address and cap of liberty on the platform. 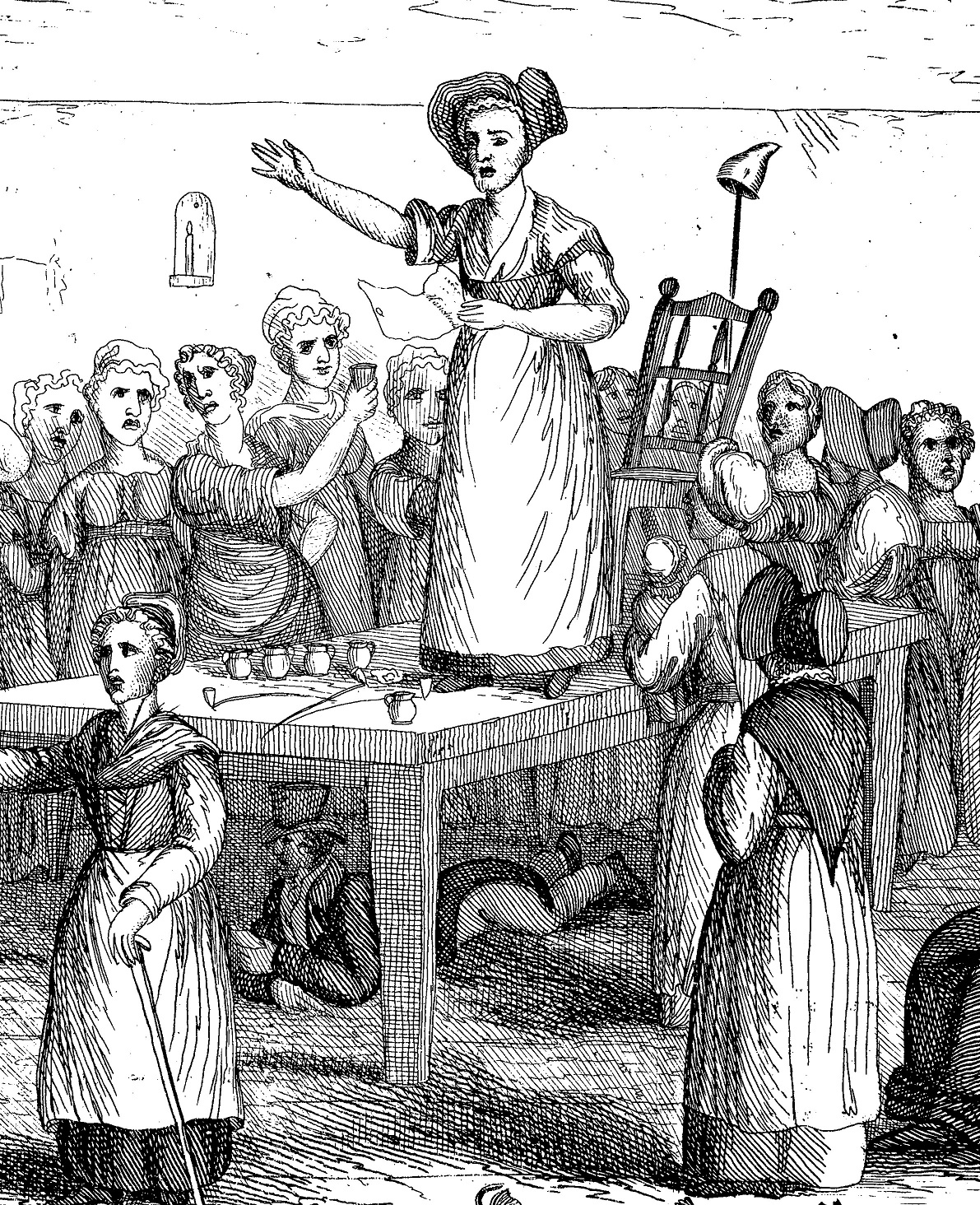 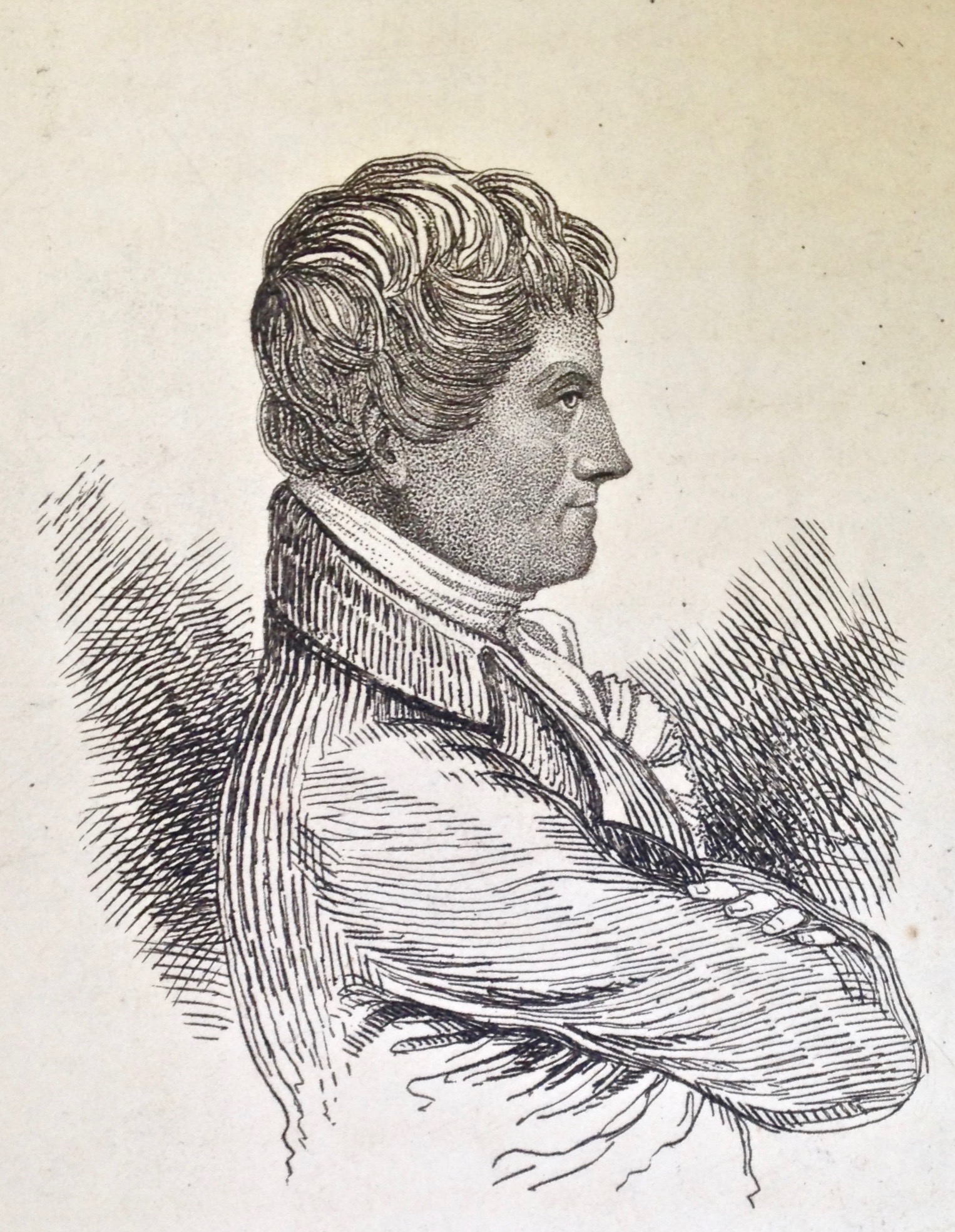 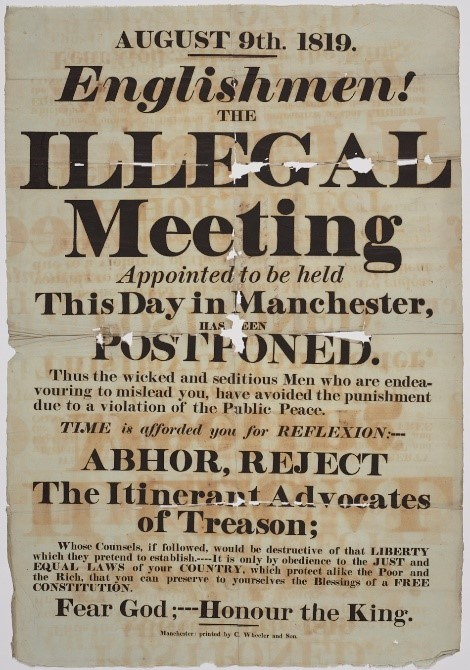 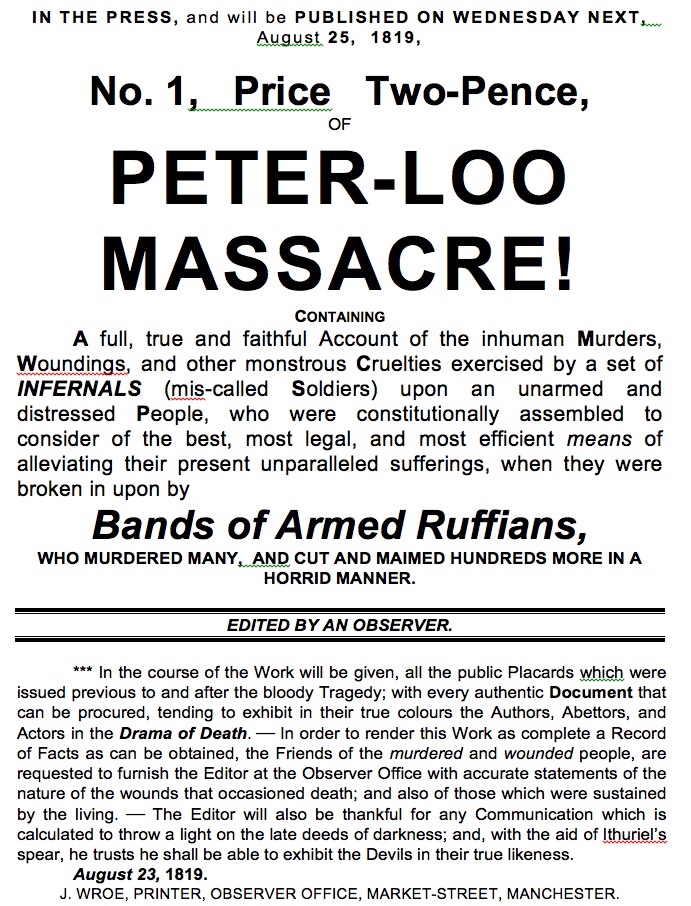 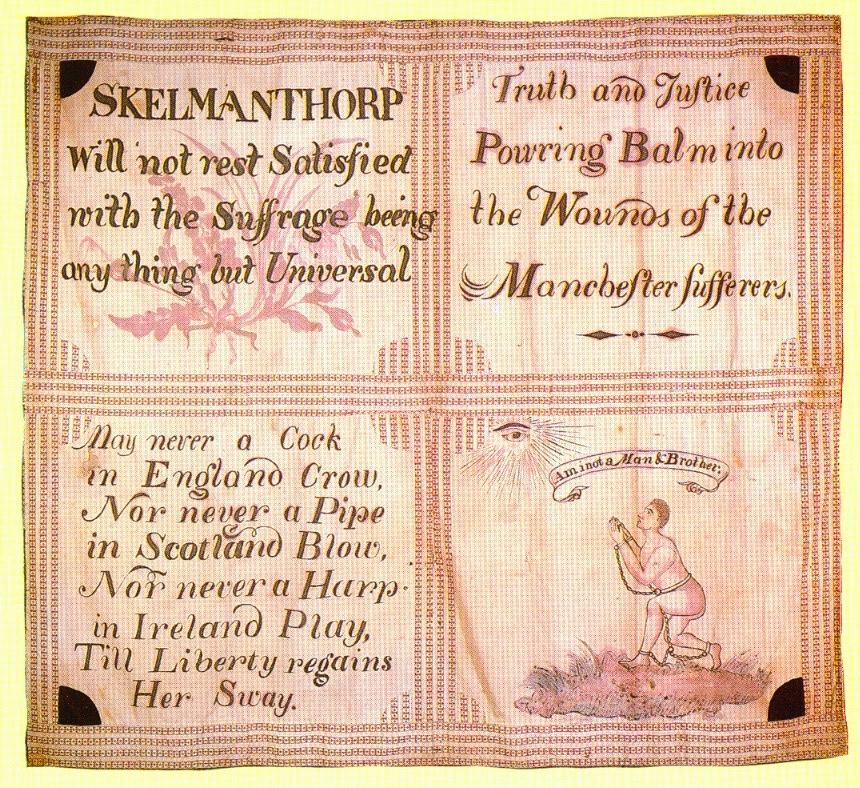 Hunt and 9 other Peterloo defendants indicted for sedition. Indictments of Manchester Yeomanry for cutting and maiming rejected.

Inquest into the death of John Lees of Oldham at Peterloo sits for 10 days, but collapses without a verdict; the jury say they would have declared it an ‘unlawful killing’. 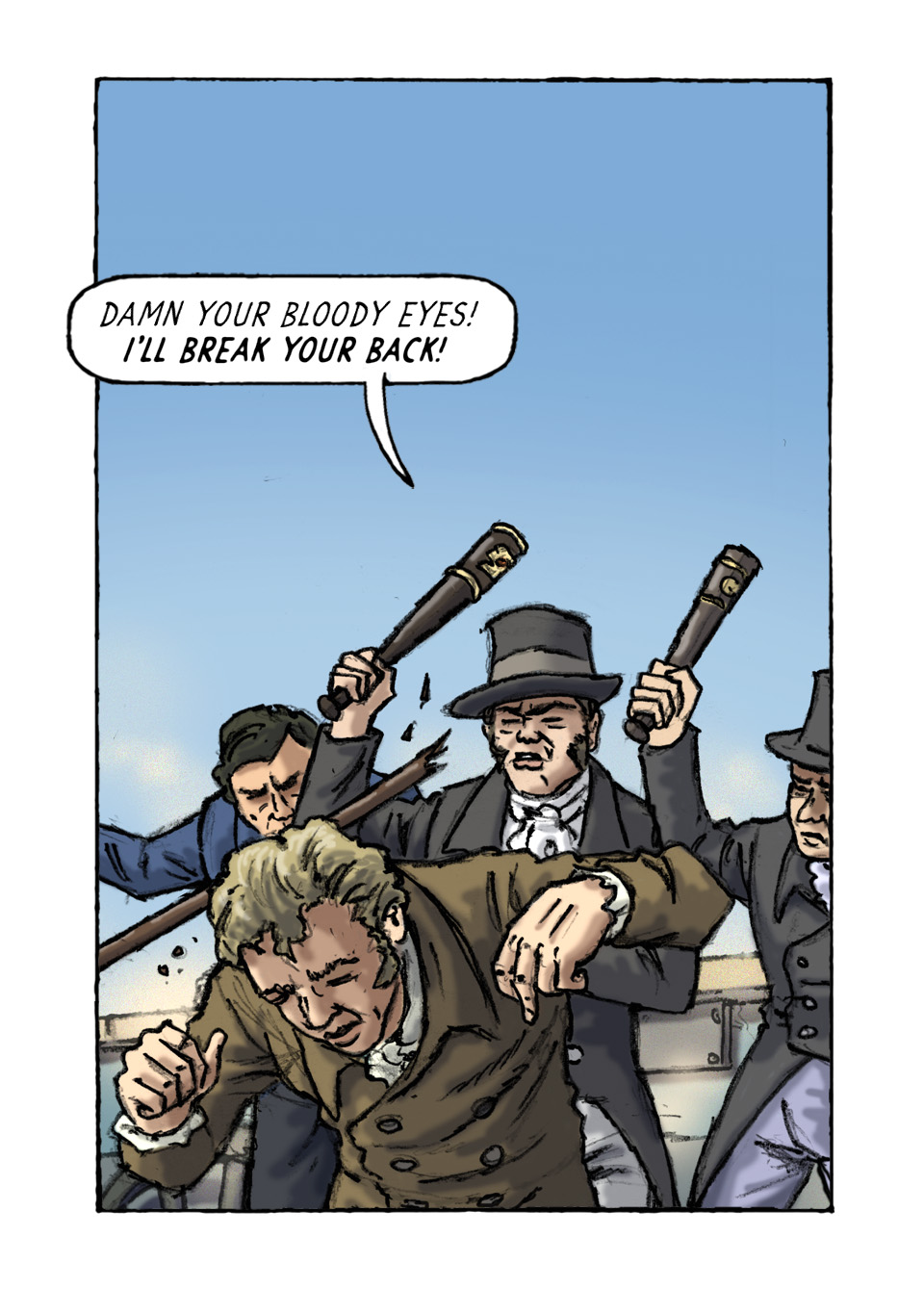 Severe restrictions on public meetings, marches and rallies, and on freedom of the press. 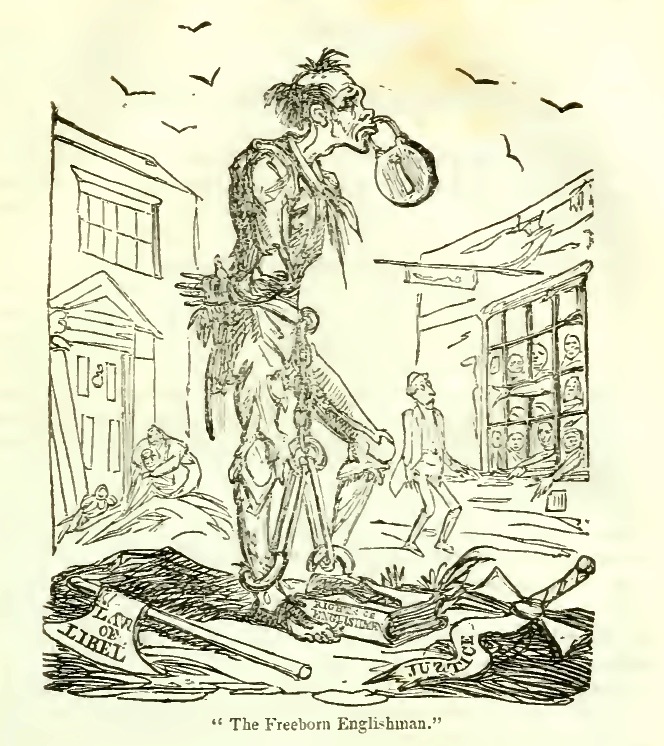 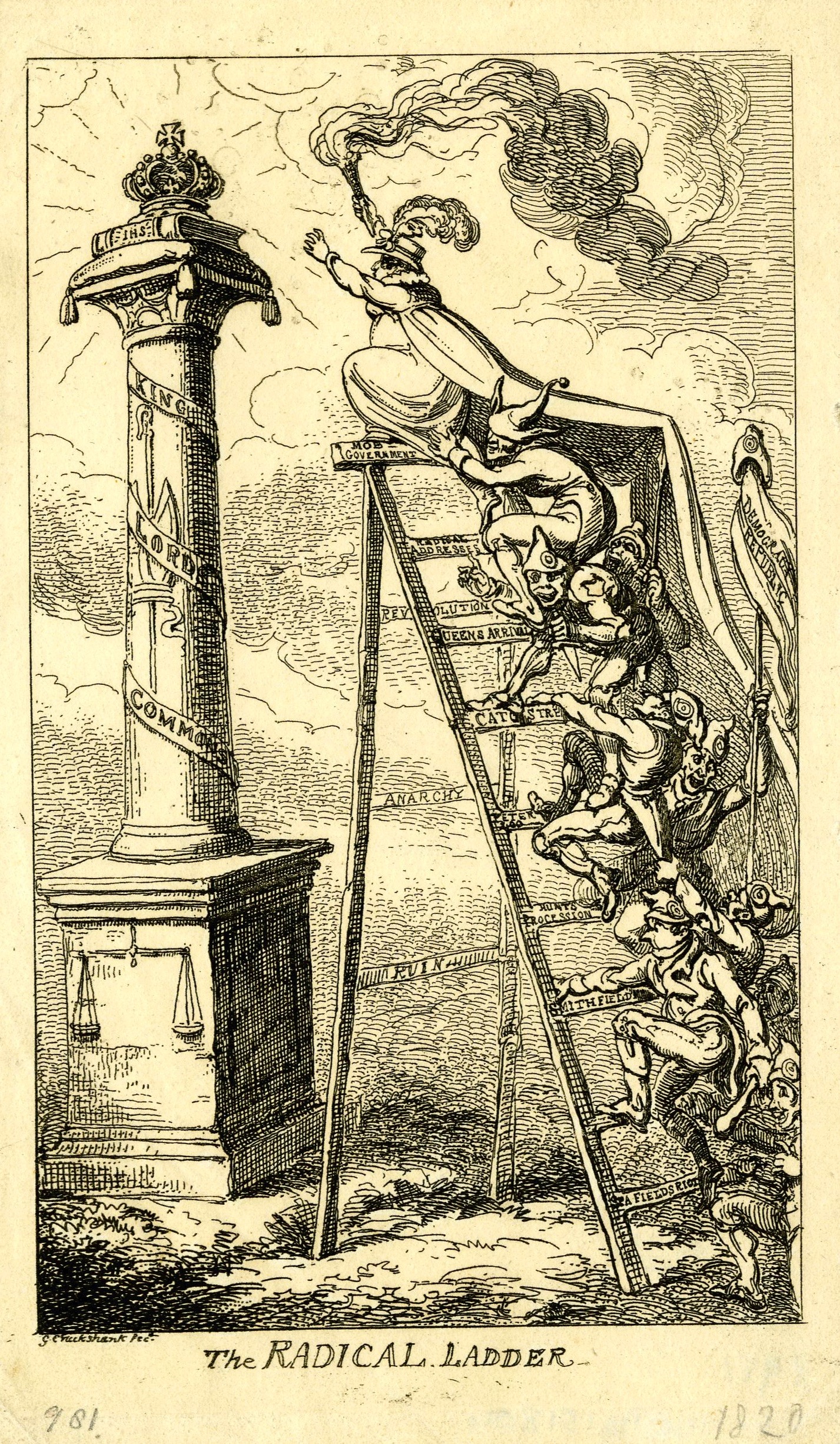 Manchester Observer ceases production in Manchester; four editors have been bankrupted or imprisoned. 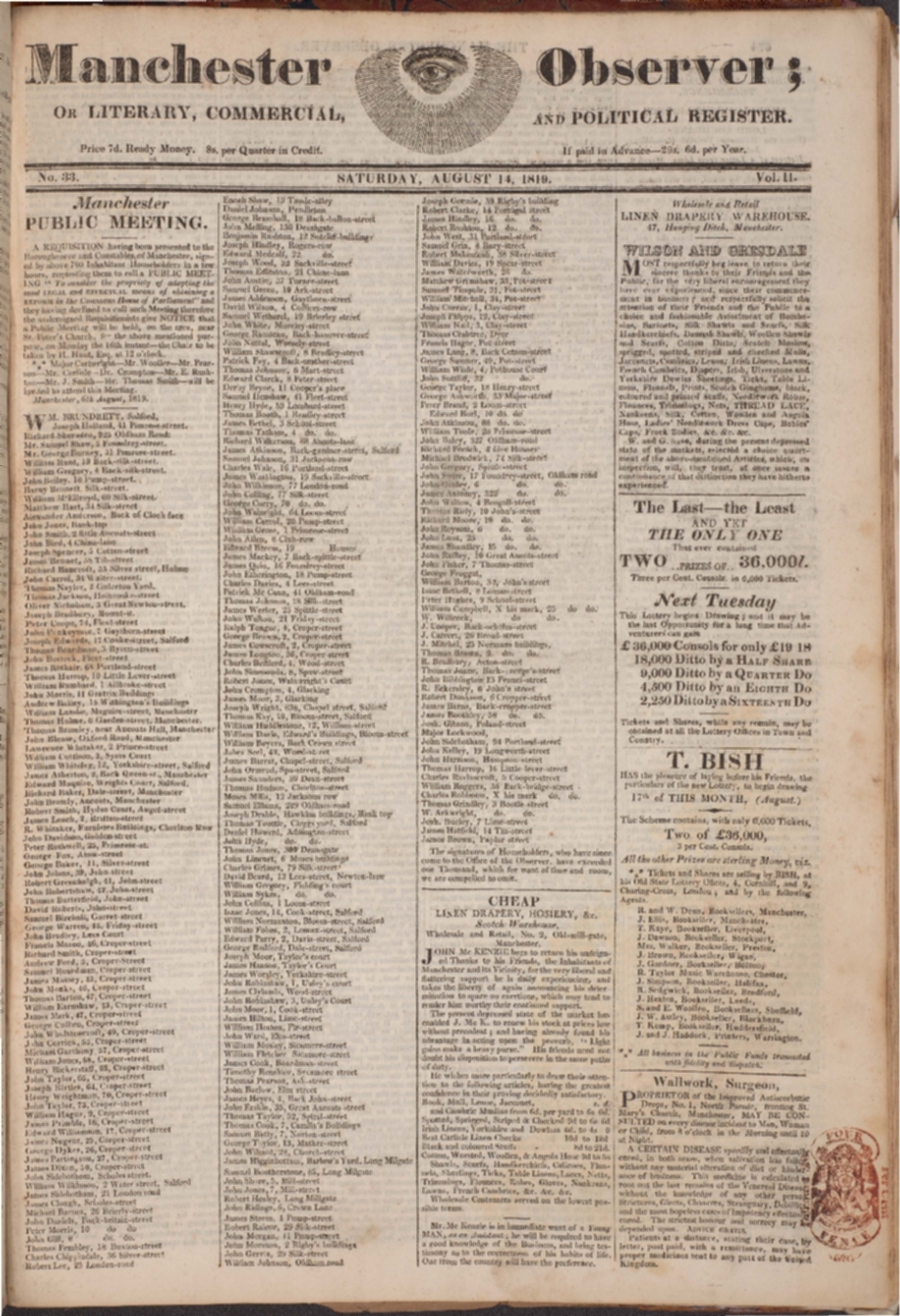