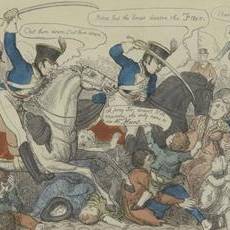 The Peterloo Massacre has been called one of the defining moments of its age.

It should of course be remembered for the brutal attack it was on a peaceful crowd of around 60-80,000 working class people by the forces of the British state. However, it should also be remembered as the bloody beginning of a two centuries long struggle by working people for electoral reform and the right to vote, in order to gain greater influence and political representation in Parliament. In addition to this, to gain greater democratic and civil rights at work and in society as a whole.

To mark the bicentenary of the events in Manchester in 1819, the organisers of the Peterloo ‘March for Democracy’ want to raise public awareness of the events which took place 200 years ago, and to celebrate working class political achievements since then. They also want to encourage as widespread public debate as possible, on the type of demands and proposals we ordinary working class people, in the here and now, might consider necessary to further stamp our overwhelming social predominance, on Britain’s current far from democratic political system, in the interests of the many rather than the few.

Some of the possible proposals we want to put up for discussion (this list is not exhaustive) are:

* Proportional representation for political parties in all elections

* The Peterloo Marchers’ and Chartists’ demand for Annual Parliaments

* A genuine democratic devolution of power to the regions, cities and towns

* A greater say at work, including statutory trades union recognition

* A written Constitution, Bill of Rights and Citizens’ Responsibilities

There will be a number of guest speakers on these and other issues from a range of organisations at the rally in Albert Square. Also public meetings across the country on the theme of democratic reform in the 21st Century to mark the bicentenary of the Peterloo Massacre. If you’d like a meeting in your area, or to speak at the advertised rally, or to get involved in organising a contingent of people from your area to take part in the march. Then get in touch with us ASAP.