A Century of Female Revolution: from Peterloo to Parliament by Glynis Cooper

Written by Glynis Cooper, introduction by Michael Wood, published by Pen and Sword.

1819-1919 was a remarkable century for women. In 1819 women had no rights, no status, no options, no vote. Females were denied higher and further education. Job opportunities were menial and few. Legally women were not even considered to be ‘persons.’  However, by  1919 they had achieved full legal rights and status; the doors of education, equality and professions had been thrown open to them; they had proved that they could do any job a man could do; and most importantly they had achieved universal suffrage.

The appalling conditions suffered by women and their families living and working in the textile industries of the north west provided the impetus to demand democratic political reforms and a fair day’s pay for a fair day’s work. Women were not allowed to join official associations so they formed their own groups, seeing the main objective as achieving positive results for their menfolk, but also fighting hard for their own rights, moving one male activist to remark that “the women were the better men…”

Michael Wood has described Peterloo in the introduction as “that key moment in the history of British democracy, when the English state unleashed deadly violence on its own citizens”.  Peterloo was a day of shocking brutality and bloody carnage, of armed cavalry cutting down unarmed citizens, during which females were singled out, hunted down and attacked to ‘teach them a lesson.’  It did teach them a lesson but not the one their attackers intended. Instead it gained them status and sympathy, encouraging them to fight on for their cause.

Women became steadily more involved in reform groups, Chartism, trade unions, politics, education, career opportunities and the suffragette cause, although they encountered fierce hostility and opposition from both men and women who believed that females should not have equal pay and opportunities, or any democratic rights.  Queen Victoria considered it would “unsex women” to allow them the vote, while many men believed female psychology could not cope with the multi-tasking required for lateral thought, political acumen, voting, child-care and running a home.  Perseverance, however, paid off, as more women fulfilled active roles in various spheres. The first female strike over pay was by weavers at Dewsbury and Batley in 1875. To male astonishment the women won handsome victories.

There were setbacks. In 1913, after hearing an application by a woman to become a solicitor, citing that regulations for legal careers referred to “persons” and did not exempt females, the judge finally ruled that “women are not persons.”  Despite continual vocal protests and subsequent militancy by suffragettes, they won neither equality nor the vote for women. In 1914 the Great War began, and women immediately proved themselves patriotic and capable by assisting with the war effort. As more men were called to the Fronts, women took over the jobs that men had done, often more efficiently. They kept the country running and provided invaluable back-up support. Consequently, in 1918, women were finally granted full voting rights and allowed to stand for Parliament. 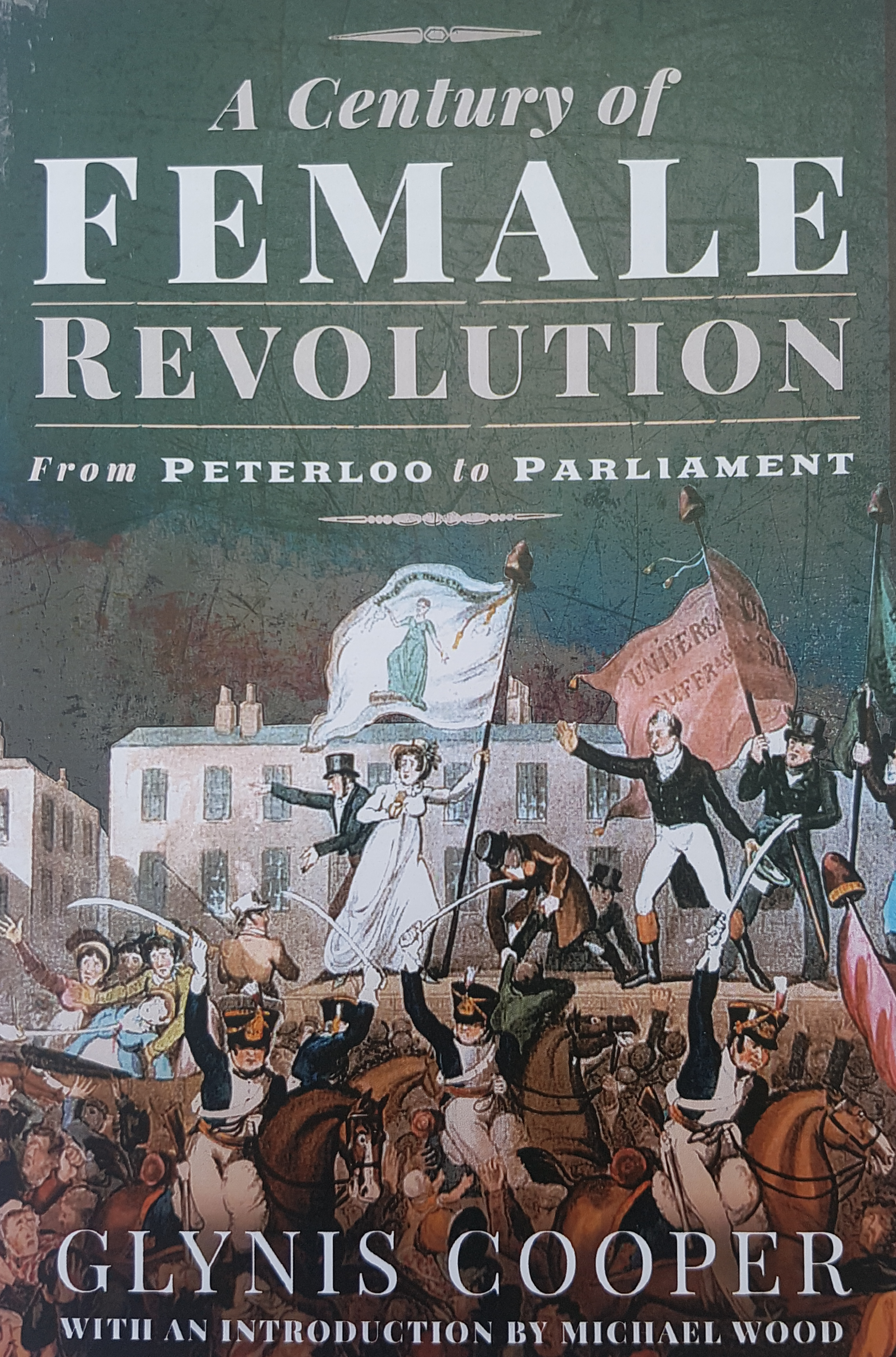 Glynis Cooper’s family has its roots in the industrial millscapes of Manchester. She was born in Stockport but grew up near Bury St Edmunds in Suffolk. Her father and her mother were both writers who decided to move away from the Industrial North, because they believed they could still hear the Industrial Revolution, even up on Kinder Scout.

When Glynis was three, she moved with her parents to a small village in the heart of Suffolk. Home was a thatched cottage, built as a modest Tudor Hall around 1490, with timber beams and an inglenook fireplace. There was no electricity, no television, no mains gas, no mains water, no mains sewage, and no telephone. Her parents had no car and there was just one bus a week into town on market day. The only concession to modern life was the narrow draughty bathroom built in a lean-to extension.

Water was pumped daily from a well in the garden and sometimes disjointed frogs’ legs came through the taps. Cooking was done on calor gas. Lighting was by oil lamps. Heating came from a single open fire, meaning the sitting room was as warm as toast, but the bedrooms could be so cold that ice formed on the inside of the windows. Glynis read a lot, becoming interested in history and writing stories, and felt her childhood gave her insight into an older world where an easy life, modern conveniences and mass media did not exist.

After leaving school Glynis lived in Cambridge for ten years, working in libraries and bookshops, before returning to Manchester to do similar work. As a mature student she gained an honours degree in Classics and Archaeology, followed by an MA in Creative Writing, and began to write professionally in the mid-1990s. She spent another ten years in the early 21st century away from Manchester, living and working in the Isles of Scilly, the Channel Islands and on a remote Spanish finca, before finally returning to Manchester. She has two daughters and one grand-daughter and loves playing chess for relaxation.

Glynis feels a close affinity with Manchester and in recent years has taken a passionate interest in its history, writing a number of Manchester titles published by Pen & Sword.  She has worked for Manchester Central Library on the digitisation of their photographic archive, and on Spinning the Web, an online history of the textile industry in the north west. She has also worked on cataloguing museum items for the Bronte Parsonage in Haworth.

Writing “A Century of Female Revolution: from Peterloo to Parliament” was a fascinating, although emotionally searing, experience for Glynis, She remembers her mother telling her the folk memory of Peterloo was still so strong in the 1960s that mounted police could not be used in Manchester. Researching the book, Glynis was appalled by the casualty lists of Peterloo, the manner of deaths and injuries, and the socio-economic conditions which led to Peterloo, turning her schoolgirl ideas of British decency and glorious Empire upside down.